VR gets closer to reality

Your future workplace may live inside a virtual reality headset. One startup wants to make sure you can’t tell the difference between that and the real world.

Finnish startup Varjo Technologies is focused on developing VR and augmented reality solutions for professionals that match the human eye.

The company, which was announced on Monday, says its human eye resolution headset — nicknamed “20/20” after 20/20 vision — will be 70 times sharper than what’s already on the market. That’s 70 megapixels, compared to 1.2 megapixels for the Oculus Rift or HTC Vive. It’s the difference between reading a poster on the wall of a room in virtual reality versus not being able to make out words.

Varjo aims to get a test version of the device into the hands of professionals by the end of the year. A consumer roll out is expected for 2018.

Related: This virtual reality startup is now worth $1 billion

According to Varjo CEO and founder Urho Konttori, a former product manager at Nokia and Microsoft, the technology can be used for training and simulations across many industries, from industrial design to medicine, aviation and real estate.

“For the first time, you actually see things as they will be or are,” said Konttori.

For example, an architect could bring existing software programs to the virtual world to test changes, like new textures.

“Virtual workspaces are completely unusable with today’s devices due to resolution and focus, and the next-generation devices from the dominant players aren’t slated to be meaningfully better,” Prashant Fonseka, investor at early-stage venture capital firm CrunchFund, told CNN Tech. “Varjo brings enough resolution and clarity [to VR] that you could actually throw away monitors and spend time in a virtual environment.”

The 20/20 headset could also offer professionals more privacy. It can serve up screens from your laptop and desktop devices, without the concern someone peering over your shoulder or spying on open browsers. 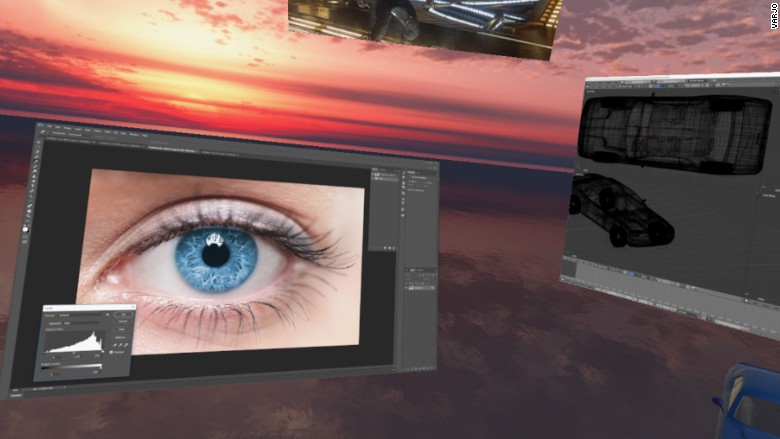 A Varjo demo shows how the future of work could look, thanks to screens and programs pulled from the real world.

I recently tried a Varjo prototype — a retrofitted Oculus Rift with a clear rectangular display in the center of the device’s screen. Anything viewed through the opening was incredibly life-like, even crisper than my naked eye. Everything outside the rectangle resembled a typical VR resolution experience: Not as clear. This was to highlight the difference between what’s available now and Varjo’s technology.

Related: The New York Times wants you to read the comments

Virtual reality experts believe it could take up to 20 years to “achieve resolutions that can match the human eye.” But Konttori believes his company is well ahead of that curve.

Varjo holds three core VR patents, including one for tech that replicates how the human eye focuses inside a headset.

MONTREAL — A record number of homes were sold in the Montreal area last month, the Greater Montreal Real Estate Board said Tuesday amid concerns that a foreign buyers’ tax in Toronto could be having a spillover effect on Canada’s second-largest city.

There were 5,057 properties sold in May, a new high for that month and up 15 per cent from a year ago, driven by a hot condo market.

Some real estate market watchers have wondered whether a 15 per cent tax on foreign buyers in the Golden Horseshoe region, which encompasses the Greater Toronto Area, would drive sales in Montreal.

Paul Cardinal of the Quebec Federation of Real Estate Boards said it’s too soon to say whether the tax, which was passed by the Ontario government last month and made retroactive to April 21, would have had any impact on transactions.

Still, Cardinal said Montreal is on track to have one of its best years in terms of home sales, attributing that to high employment growth, more non-permanent residents and improving consumer confidence.

“Demand is strong and listings are going down,” he said. “We’re back in a seller’s market for single-family homes.”

Last week, Quebec Finance Minister Carlos Leitao told The Canadian Press he has no plans in the near term to introduce a foreign buyer’s tax on Montreal homes but is open to the idea if one is needed.

While concerns abound about real estate prices in the sizzling markets of Toronto and Vancouver, Montreal remains a relative bargain.

The average price of homes in the Greater Montreal Area rose year-over-year to $368,558 in May, and to $461,345 on the island of Montreal, both increases of four per cent. But those prices are still a fraction of what homes go for in Toronto and Vancouver.

The Hippodrome, also known as Blue Bonnets, is one step closer to becoming a new urban neighbourhood.

Quebec announced Tuesday it has given up the land to the city of Montreal. Mayor Denis Coderre announced plans for a 5,000 unit housing development.

“It’s very rare on the island of Montreal that was have a chance to build a community like this from A to Z,” said Russell Copeman, the city’s pointman on housing and the Mayor of Cote-des-Neiges/NDG.

There will be public consultations to decide what the new community will look like.

Thirty per cent of the housing will be affordable and social housing.

According to the deal with Quebec, the city has to begin selling the land to developers within six years. 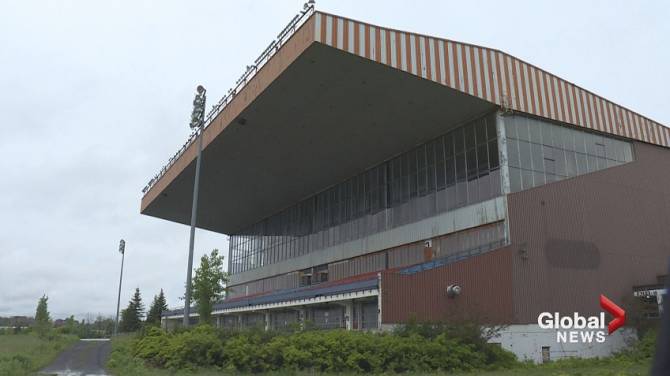 Between now and then, they’ll have to demolish the asbestos-filled clubhouse and install sewers, power lines and other necessary infrastructure.

“The site is without services at the moment so it’s going to take us some time to do the planning that’s necessary,” said Copeman.

Critics wonder what took so long.

“Council voted in 2012 to have the land transferred but Quebec never followed through. The club house was supposed to be demolished in 2014. A public consultation was supposed to be held in 2015 and 2016. This year we were supposed to start selling off this land parcel by parcel. None of that’s happened,” said Snowdon City Councillor Marvin Rotrand.

Quebec Finance Minister Carlos Leitao blamed the political turmoil that hit Montreal in 2012 for the delays.

The land transfer also helps the city move ahead with the long-awaited Cavendish extension.

“Cavendish-Cavendish will happen. But first things first: we needed to settle that issue,” Coderre said.

Critics worry about potential traffic chaos if the Hippodrome is developed before the two sides of Cavendish are connected.

“There’s still a lot of questions that need to be answered. How is this area going to accommodate all that new traffic?

But the city is confident everything will work out.

“We believe the two projects will keep pace with each other,” Copeman said.

While the once-soaring housing markets in Toronto and Vancouver are showing signs of cooling, Montreal is just getting started.

Demand in Canada’s second-largest city has heated up enough to put Montreal-area home prices on track to rise 6 per cent this year, the biggest jump since 2010, according to the Quebec Federation of Real Estate Boards. That’s up from a January forecast of just 1 per cent growth. Job creation, robust consumer confidence and new immigrants are fuelling demand.

“We aren’t as crazy as Vancouver and Toronto as far as price increases,” said Eric Goodman, agency executive at Century 21 Vision in Montreal. “But activity is pretty good.”

Montreal’s real estate market so far has been left out of the global spotlight focused on the booming Canadian property markets of Toronto and Vancouver. That could change as foreign-buyer taxes in those cities curbs demand and potentially sends purchasers looking for a cheaper place to invest.

“I wouldn’t be surprised if Montreal becomes the new target for foreign capital investing in residential real estate,” Cynthia Holmes, a professor of real estate management at Ryerson University in Toronto, said in an interview Wednesday.”Montreal is the Goldilocks of the Canadian housing market,” she added, with Toronto and Vancouver too hot and Calgary too cold.

There are early signs of new interest in Montreal.

The city has attracted “a bit more” Asian investors since a 15 per cent foreign buyers tax was implemented in Vancouver in August, according to David L’Heureux, Canada Mortgage and Housing Corp. principal of market analysis for the Montreal region. “At the moment I don’t think it has a significant impact on demand,” he added.

Non-Canadian purchasers in Montreal made up about 1.3 per cent of the market last year, up from 0.7 per cent in 2013, according to CMHC, the Ottawa-based housing agency. “We expect the number to remain close to 1.5 per cent in the short term,” L’Heureux said in an interview Monday.

That compares to a Toronto Real Estate Board estimate of fewer than 5 per cent of foreign buyers last year in its region, where demand slowed after policymakers introduced a foreign buyers levy last month. Foreigners accounted for as much as 16.5 per cent of the value of property sold in the Vancouver region before British Columbia imposed a tax in August, according to the province. That figure fell as low as 1.8 per cent in September, though it has crept back up.

While growth has slowed in both Toronto and Vancouver, the median price of a single-family home in Montreal is seen climbing to $312,500, faster than last year’s 2 per cent gain and the 1 per cent increase predicted earlier. Montreal remains a bargain, with average prices about one-third the levels in Toronto and Vancouver.

Montreal also is on track to break a seven-year record for number of homes sold, with 41,500 properties expected to change hands, up 4 per cent from last year, according to the Quebec board, which in January predicted a 5 per cent decline.

While the effect of the Toronto and Vancouver taxes remains to be seen in Montreal, a 6 per cent rise in home prices “is not problematic for now,” Quebec real estate board market analysis manager Paul Cardinal said in an interview Tuesday.

“It’s still cheap to buy a house in Montreal compared to other major markets in Canada, but activity has been higher than we thought it would be this year,” Cardinal said. It’s “too soon” to predict if the city may be on the verge of its own housing boom.

The average selling price of a detached home in Toronto rose 24 per cent last month from a year earlier to $1.2 million. That followed a 30 per cent increase in March. In Vancouver, the average benchmark price increased 8.1 per cent to $1.5 million in April.

Unlike Canada’s financial hub of Toronto, or Vancouver — popular with Chinese immigrants and others drawn to the Pacific Northwest — Montreal has a solid supply of housing to meet demand, including in the rental market, according to Cardinal.

“There has been a substantial increase in supply in Montreal,” Quebec Finance Minister Carlos Leião said in an interview in New York last month. The province is closely watching for any spillover effect from Vancouver and Toronto and doesn’t rule out a measure that would better enable government to identify foreign buyers, he said.

The Quebec real estate board’s previous low forecast for Montreal housing this year stemmed from concern that stricter federal mortgage rules introduced last year would crimp demand. That hasn’t happened, Cardinal said. He added that Quebec also isn’t seeing any fallout from the near collapse of Toronto-based Home Capital Group Inc. as it isn’t “a main lender” in the province.

“The market today seems to have changed,” said Goodman at Century 21. “Houses aren’t staying on the market that long, the inventory of quality property is really low and anything priced right is getting multiple offers immediately.”